Paris was a favorite resort for the rich Americans of the 1880’s and when the news of a “new” breed was heard of  wealthy buyers came to see it for themselves.  It was the French Bulldog that they found there.
French Bulldogs are without controversy from Great Britain, but it was the Americans that were influential in selectively breeding the French Bulldog into the breed like those of today.  They are also responsible for giving them the massive head, square jaw, and compact body and most of all their bat ears that we see now.  Americans wrote the breed standard, which has had little change in over one hundred years.
The French Bulldog is a stocky dog of no more than 28 pounds.  The French Bulldog possesses a medium sized muscular body, a bulldog type face with full lips and turned back nose placement, with bright expressive eyes.  The distinctive, upright “bat” ears are like that of no other dog in the world.  They add to French Bulldogs overall pleasant and almost grinning facial expressions, that gives the French Bulldog it’s strikingly attractive appearance.  His legs are short and stout.  The French Bulldog comes in a variety of colors, the most common by far being the brindle (a mix of black and brown hairs) and the fawn (a rich blond).  Some are spotted and known as pied, white body with different colored spots (some brindle, others fawn).  Fewer are Black masked fawn, Red fawn, Cream, or White.  Their coats are short and somewhat dense and smooth; essentially maintenance free.  French Bulldogs are born with short tails and ears that naturally stand erect – no cropping needed.
The French bulldog will bark an alarm, but is much too friendly to do much more than invite them in, a better host than a defender, the French bulldog is a quiet and friendly dog.  The breed is outgoing and always affectionate to everyone.  He knows no strangers, and is naturally outgoing.  He is always ready to make new friends, be they adults, children, cats, or other dogs and animals.  French Bulldogs have a boundless capacity to give and receive affection, any loving environment is the right home for a Frenchie.  French bulldogs are house dogs and their niche in life is to be an adored pet.  He is happy and playful, loves children but is equally content to live with a single special person.  Their size and moderate energy levels fall somewhere between that of a Pug or Boston Terrier, a bit too busy, and that of the large and relaxed English bulldog, a bit too relaxed.
Not a numerically popular breed, they do have a large following throughout the world.  The difficulty in breeding these dogs has always kept the numbers in check and that will always be the case, they are always a C-section birth!  A costly puppy to bring into this world, of which their cost reflects.  French Bulldog litters are small, usually three pups or less.  The French Bulldog pups are slow to mature but once properly started in life are a very healthy breed with a life span of 12 to14 years.  They have no fear of cars or water. French Bulldogs cannot swim a lick so steps must be taken in this regard to keep him safe.  They are just too trusting of their human’s world.
French Bulldogs are extremely intelligent and willing workers in obedience and other works of the mind.  French Bulldogs like being your clown on a bad day making you laugh and a loyal friend when you have a secret you can tell no other.  French Bulldogs are the most loving, huggable package you will ever have and love them you will, like you never though possible!  Once you have a French bull in your life to love, no other average dog will ever do again.  So if you would like to add a new love in your life,  E-mail or call us..

We’d be happy to help you…. Questions gladly answered ! !

I’m thrilled to share good news, my wonderful, handsome boy CH Smokey Valley’s Copper Cooper is ALL CLEAR on his genetic testing. I’m so proud of this outstanding boy in all ways from structure to temperament to health, and I’m forever grateful to the Shannon’s of Smokey Valley for their years of hard work and service to the breed and for saying “yes” to me.

Hi Michelle, I just completed the recommended battery of disease tests recommended for the French Bulldog breed and I wanted to send both CH Cooper’s and GrCH Lincoln’s test results to you. I have not tested beautiful Sparky yet but considering Lincoln’s status I assume that she is clean as a whistle too. I cannot tell you how much Cooper and Sparkle mean to me, both as members of my family and as producers. I am so honored to have them, so proud of them and so grateful that you gave me the opportunity to own them. You have done such important, remarkable things in this breed, I sincerely hope that you get the credit that you so richly deserve. I couldn’t have asked for any finer examples of this breed that I got in Cooper and Sparkle and now their kids. To know that they are also in stellar health is beyond fabulous. Thank you for everything! My best, Shelley

Like father, like son. GrCH Starlit Mesa Mr. Lincoln is ALL CLEAR on his genetic testing. Lincoln is such a fine example of the breed in all ways, just like his fantastic parents, CH Smokey Valley’s Copper Cooper and Smokey Valley’s Twilight Sparkles. Linc is a joy to live with and he makes me proud and happy every minute of every day.

Hi Michelle, I know that you have sold a lot of French Bulldogs over the years, so you might not remember me.

I bought my French Bulldog, Louis, from you back in 2000 and then a year later in 2001, I came back and picked up Ruffy (Roughcut.)

I just wanted to let you know that we put Ruffy to sleep this morning, but that she had a wonderful life with us for eleven of her 15 1/2 years.

She was very healthy and active for her entire life until about two weeks ago when it was very obvious to us that her old age had finally caught up with her.

Louis will be twelve in September and he is still going strong. We hope that he will be with us for a few more years like Ruffy.

I just wanted to thank you for bringing such wonderful friends into our lives.

My husband and I hope that you plan to breed French Bulldogs for many more years,

because I’m sure there will come a time in the future when we will be ready to bring another little Frenchie puppy into our home.
I hope this email finds you and your family well.
Best Wishes,
Krista Calvin

The most loveable watchdog: The French Bulldog

Ears like a bats, sticking straight up from a square head, a flattened nose

consisting simply of two nostrils. the whole lot carried on a powerful neck attached to a broad chest, a delicate shape terminating in two rounded, muscular hindquarters and a tail naturally short.

So much for the French bulldog, which you either love already or will love when you have made its acquaintance.

They say the first to buy them were the gay ladies of Montmartre, then others, in a rather higher social position, liked to show off by taking them out driving along the boulevards in their victorias. From then onwards the small bulldog became fashionable and was soon to be seen on the stage and at the holiday resorts.

Quite a long list could be compiled of the distinguished people who have owned French bulldogs. It would include royalty such as the Prince of Wales (before he became Edward VII) and the grand dukes of Russia, great artists such as Chaliapine and Mistinguett, writers such as Colette and notabilities of the world of fashion and the press. Almost everywhere in England, Belgium, Austria and American clubs and breeding establishments sprang up.

The infatuation of which the French Bulldog is so often the object, springs first of all from the originally of his appearance and his charm. He is a good watchdog and a delightful companion, proud without being resentful but when vexed he knows how to show it. Affectionate but not excessively so he adapts himself perfectly to our ways without altering his own. When you made a friend of him, you will have his friendship for ever, for he is nothing if not faithful.

His education and his health depend on his master. Get you dog accustomed from the time he is a puppy to living rough and playing rough out of doors.

If you live with him in the country you will see him make his rounds at daybreak following a well established itinerary, return to the house and sit down outside the door of your room to which he will demand admittance, purposefully gently and obstinately. He will rub lightly against the door until you let him in. He wants to say good morning to you and will do so most affectionately.

When you go down to breakfast he will go with you, sit down beside you and look at you steadily until you realize the fact… which you have done for a long time… that he wants his piece of bread and butter. Later if you get into the car he will expect to be taken with you and will sit quiet throughout the journey. When you stop, if you leave him in the car you can do so with the certainty that it will be well watched.

If you go away and don’t take him with you he will pine a bit, but will choose the most advantageous observation post he can find to watch for your return. The welcome your French Bulldog will give you will vary according to his character, but will be quite unresentful. Always happy to have you back into his life and that you are home safely to him.

When it comes to intelligence? Well yes I would say so as some when thirsty will pick up his bowl and drop it at your feet as if to say Hey I’m thirsty!

Also for example if getting up on the bed is a known no no, with the woman of the house you dog will simply await her leaving the room and sunggle with the man of the house until he gets up OR until he hears her return. Upon him hearing his mistress coming back, his ears will stand straight up and he will be down again like a shot as if to say “The real master has returned and I must not cause trouble for him”

His education and his health are in the hands of his master. Bring him up well and Remember too he likes to share the comforts that you yourself enjoy. Like human beings, these dogs delight in luxury but there is a happy medium. natually you want to spoil your dog a bit sometimes but don’t do it to excess.

Treat him well and he will repay you ten fold with all the joy and happiness that is French Bulldog. 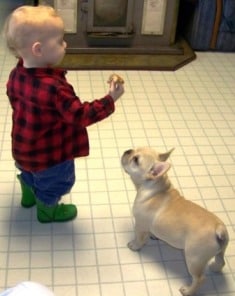 showing he has what it takes to be a great show dog.

His Junior handler is our grandson.

Being schooled by a Junior handler